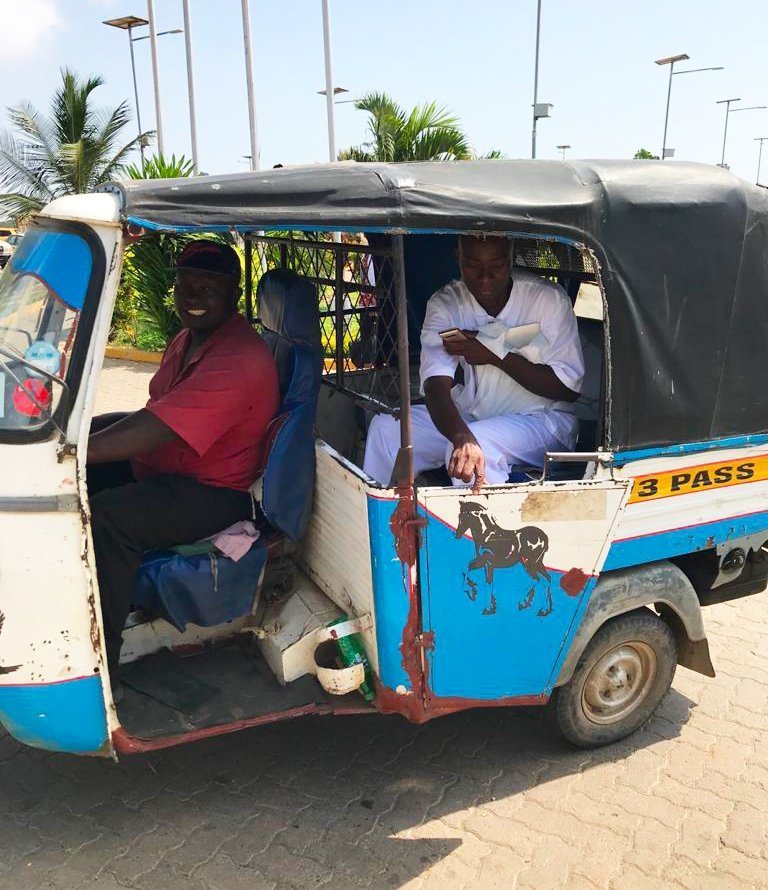 in Culture
by admin
0 Comments

You’ll never get lost in a Kenyan town, nor in Malindi neither in Nairobi, because a very special transportation will be allways there to save you…the Tuk Tuk.  Better known as Auto rickshaws are a special form of three-wheeled motorcycle. It is  cheaper than ordinary taxis which make them preferred by city dwellers and compete as well  with other commercial means of transport including Motorcycles, locally called the boda bodas and minibuses, locally called matatus. It is also a good option for visitors who wish to get private transportation from one end of the city to another.

Called tuk tuk, imitating the noise made by the vehicle’s engine, they come in  many different types, designs, and variations. The most common type is characterized by a sheet-metal body or open frame resting on three wheels; a canvas roof with drop-down side curtains; a small cabin at the front for the driver, with handlebar controls; and a cargo, passenger, or dual purpose space at the rear. Their bodies are  colourful, painted with slogans or often decorated with pictures of worldwide famous sport champions or personalities.

The next time you hop on a 3-wheeler, spare a thought to its history. Our humble auto rickshaw is as old as 60 and has transformed into one of the most reliable urban modes of transportation. Who would have thought it but they were born in the far and exotic Japan

Tuk tuks began in the Asian Empire as rickshaw, carts with two or three wheels pulled by one person carrying passengers. It was around 1869. The name Rickshaw originates from the Japanese word jinrikisha (jin = human,  riki = power or force,  sha = vehicle), which literally means “human-powered vehicle”. With advanced technology, these carts were modified and advanced such that it wouldn’t be pulled manually by a driver but powered to move from place to place by an engine.

How did they arrive till Kenya? In the 1930’s the Japanese Ministry of Posts and Telecommunications of Japan distributed about 20,000 used three-wheelers to Southeast Asia as part of efforts to expand its influence in the region. They became popular in some areas, especially Thailand and then India. And it’s from there that they reached the African Continent.

Just a tip: some years later, In Europe, Corradino D’Ascanio, aircraft designer at Piaggio and inventor of the Vespa, came up with the idea of building a light three-wheeled commercial vehicle to power Italy’s post-war economic reconstruction. The Piaggio Ape followed suit in 1947 and it’s still in use.

Greener than cars even if somewhat noisy, nowadays rickshaws with their small size and narrow body are one of the most widely-used modes of transportation in all African metropolitan cities. They are known by many different terms

In Madagascar, they are known as pousse-pousse, meaning push-push, while in Tanzania rickshaws are locally known as “bajaji” and are a common mode of transportation in the capital Dar es Salaam

Known as “Raksha” in Sudan as well are the most common mean of transportation followed by the bus  in the capital Khartoum.

The largest TUK TUK producer? As of 2019, Bajaj Auto of Pune, India is the world’s largest auto rickshaw manufacturer, selling 780,000 during the fiscal year.

Ready for the ride? Enjoy it and remember that Tuk Tuk have not a taximeter. The price should be agreed before. A short trip would be around KES 50/100.